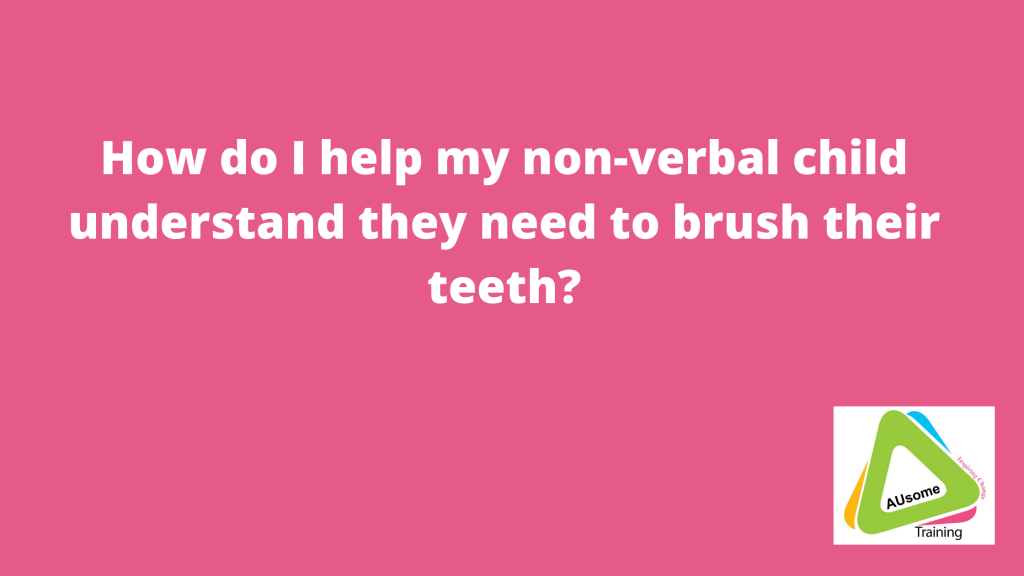 How do I help my non-verbal child understand they need to brush their teeth?

“How do I help my non-verbal child understand they need to brush their teeth?”is a question which has come up a few times during our autism courses and I’d like to break it down in this article. Usually when I probe a bit more I find out that the child is having very big emotional responses to teeth brushing. They are protesting it.

Secondly, the way this question is phrased supports the idea that “non-verbal” children or adults are somehow non-thinking or that they can’t understand just because they cannot speak. Speaking is a motor skill and not a sign of intelligence. It also goes against the mantra in the Autistic Community of “presume competence” which means that we presume the Autistic child is just as competent as their non-autistic peers. We now know that many Autistics were misdiagnosed with Intellectual Disability instead of their motor difficulties being noted, realised and catered for.

Thirdly, the focus is on the child’s understanding. There’s an assumption here that the child doesn’t understand why they must brush their teeth, this is not presuming competence, this is presuming that they don’t brush their teeth because they don’t or can’t understand oral hygiene. Non-speaking Autistic adults who share their childhood experiences show us their depth of understanding and knowledge. Some of it far exceeding “milestones” for their age so I’m pretty sure a non-speaking child can understand the reasons behind brushing their teeth just like any other child.

Now that we’ve got all of the underlying discriminatory ideas out of the way we can actually answer the question or even rephrase it. “What alternatives to teeth brushing are there because my child experiences pain on teeth brushing and finds it traumatic so they now have a trauma response when we attempt to brush their teeth. They may lash out or have a meltdown”

I’ve rephrased the question from “How do I help my non-verbal child understand they need to brush their teeth?” because if we get over the discriminatory ideas and presume competence we can see that the child is having real difficulty or pain when brushing teeth rather than the idea that they just don’t understand that they have to brush their teeth. The child knows what hurts them. It also puts the focus on sensory differences rather than on it being something cognitive.

If we look for alternative ways to maintain oral hygiene that work for the child then we work on adapting the environment to the child’s needs rather than trying to force the child to brush their teeth and in the process teaching them that their consent doesn’t matter.

How do I help my non-verbal child understand they need to brush their teeth?