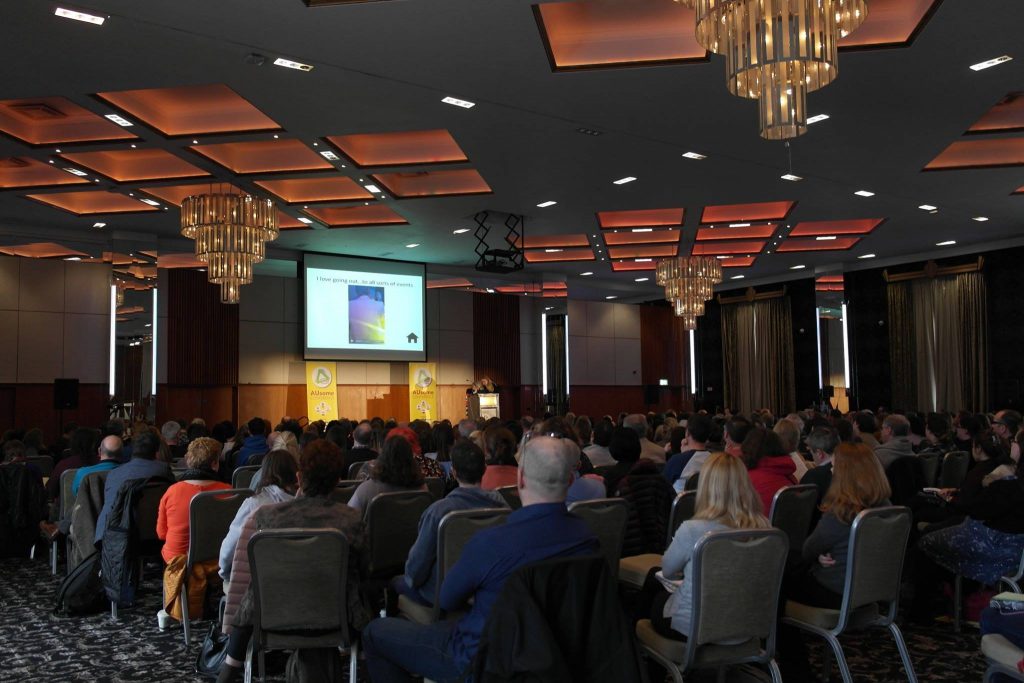 Behind The Scenes at Ireland’s First Ever All-Autistic Conference

But what made AUsome Autistic Conference just so AUsome?

It was the sense of community you could feel as soon as you walked into the Conference Hall.

Groups of Autistics gathered together, sharing laughs and being able to stim freely.

A positive energy just oozed from the room.

Passing through a room full of Exhibitors to get there,you could see rows of paintings, books and hand-crafted works done by Autistics in all colours, styles, shapes and sizes.

I thought to myself, how many times during my life had I seen Autistic people undermined and underappreciated even underemployed and compared against an idea of a ‘Medical Model.’ But I wished society could see the reality; a community of Artists, Authors, Public Speakers, Autistic Trainers and so much more!

So it was time to set about capturing Autistics in their true environment, where they were free to shine their light.

What makes AUsome unique to other organizations?

The Autistic Conference, organised by Evaleen Whelton was head-lined by nine Autistic speakers who invoked a strong sense of community amongst fellow Autistics on the day, spoke about Universal issues faced by Autistics such as Autistic Human Rights and highlighted the negative narrative around Autism.

‘Bridging the Gap’ was the theme on the day. Speakers included Lei Crowe who spoke on Gender Diversity, Stiof MacAmhalghaidh subject matter expert at AUsome Training who spoke about  ‘Autistic Space,’ and Jennifer Cooke O’ Toole author of Asperkids amongst many other speakers.

Capturing the moments on the day was like nothing you could put into words, seeing that ‘light bulb’ moment during talks like ‘Autistic Space’ where the audience shared a ‘me too’ moment.

Or the head-turning moment Dean Beadle, British Autistic advocate burst into song, singing ‘I Just Can’t Get Enough’ and all you could see were audience members standing up from their chairs one by one and moving to the beat.

To say it was a success was an understatement, AUsome Conference was Ireland’s first All-Autistic Conference, opening the floor to Autistics on a scale never before seen in Ireland….

That was my first encounter with AUsome Conference and now I’m working as their Marketing and Social Media Officer.

PrevPreviousAUsome Training: Are you ready to be challenged?
NextAn interview with AUsome Founder Evaleen WheltonNext

Behind The Scenes at Ireland’s First Ever All-Autistic Conference