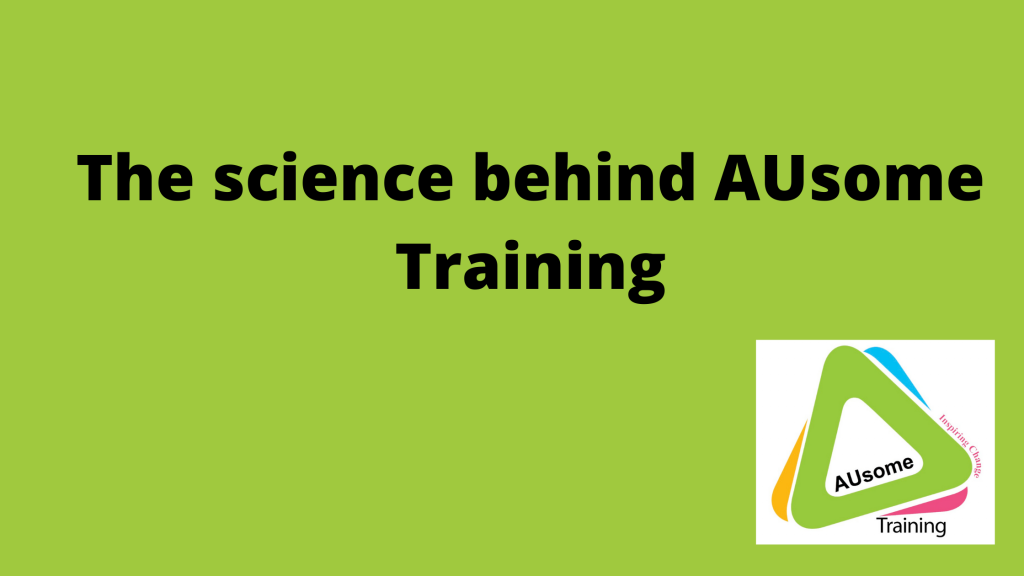 The science behind our autism training

AUsome Training produces lots of educational material. We produce original material
on a weekly basis. Where do we get all these ideas? Where is the science behind our autism training? Much of what we describe and discuss in our webinars, courses and online posts fly in the face of what it says in books about ‘autism,’ so where has all this come from? Well, it is not just fanciful inventions. We also need to look at the science behind autism. When we break down this “science” we see that it has been based on fundamental errors.

Our material combines well-established orthodox theory from psychology, sociology,
neurology (and several other –ologies too at times) with the results of careful
research and analysis within the Autistic Community itself for over a quarter century.
As we go, we continually question our sources. Is this right? Is it fair? Is it balanced?
Is this supportable? What’s the science behind this? What are the counterarguments? Show me the original research? Is this idea representative? Are we being inclusive? What are we not seeing?

That last question is maybe the most important. We actively seek out perspectives
from Brazil, Poland, Finland, Japan, Germany, Singapore, South Africa, Italy, Israel and
elsewhere because even today research can get trapped in cultural or linguistic
bubbles. We also make a point of encouraging voices on autism from diverse ethnic, religious,
gender and disability communities to reality check our work, to be part of it and
share our platform. This really matters, especially as the English-language North
Atlantic bubble can feel like it contains all human knowledge and it absolutely does
not. Even within that minority and marginalised voices tend to get swamped.

This is an ongoing process. We have not come close to being inclusive, so we will never
stop seeking out and listening to people who might challenge our assumptions.
It all starts with observation, though. The Autistic Community has grown and
developed over the last three decades, and from the start our pioneers put their
heads together and shared experiences and observations, critiqued theories, and
debated possibilities. The Autistic Community is a research community as much as a
social community.

AUsome Training stands on the shoulders of those people, from Sinclair, Lawson,
Willey, Williams and many others to the researchers of today such as Gernsbacher,
Murray, Milton, and Kupferstein – tens of thousands of Autistics focused on a few
simple but crucial questions. The answers we present in our autism training are often very
similar to those described by our community decades ago, tested and found to be
accurate, subjected to research and critiques for decades. We use up to date
terminology that has taken time to develop, and certainly there’s been a lot of new
science we can lean on, both from Autistic and non-Autistic authors that is now
available through peer-reviewed journals and reference books, but the core message
is the same, and you can check this for yourself by reviewing publications from 2008,
2005, 1998, and even into the early 1990s.

What about the science that says the opposite to us?

So, what about the vast body of scientific research on ‘autism’ that tells a different story? What
about ABA’s ‘evidence-based’ therapies, what about ‘theory of mind,’ ‘the extreme
male brain,’ ‘the autistic spectrum,’ ‘autism diets’ and ‘leaky gut,’ or even the
diagnostic criteria used in ICD and DSM manuals? Well, we’ve read and analysed those too, and much more.

One of our team recently calculated they had worked through over 9,000 research papers and read well over
250 academic and non-academic books relevant to the topic.
But we’ve not stopped there. As members of the global Autistic community, our staff
and collaborators have been in the thick of debate and research for the last decade
and beyond. The ideas we present reflect that community’s experiences certainly, but
also take account of developments in psychology, psychiatry, neurology, sociology,
social and science history, gender studies, disability studies, education theory, and
much more.

The result is a perspective that backs up observation and community analysis with
science. Then challenges the results. Then calls on others to pick holes in it all.
When we talk about the self and person, identity and choice, motivation and
emotion, it is based on a century of science orthodoxy from William James to
Antonio Damasio and Robert Sapolsky. When we discuss sensory sensitivities it is
based on multiple neurological studies carried out from 1961 to 2019. Our approach
to behaviourist therapy is founded in powerful arguments generated originally by
scientists themselves over the last century. Our discussions of mental health and
trauma come direct from the experts in those fields. Even though many would expect
us to ignore the much-derided Leo Kanner, even he has played a role in the
development of our materials.

This may seem confusing. How on earth could we come to conclusions that appear
to be diametrically opposed to established thinking on ‘autism’?
The answer, actually, is simple. That established thinking was founded on the
assumption that children studied in the first half of the 20th Century were disordered,
and based on that assumption, any characteristics that deviated from the norm of
the day were considered to be disordered also. And as the children were almost all
white European or North American, mostly middle class, mostly male, and the tests
and definitions of ‘normal’ were constructed from very particular groups of social
priorities and assumptions, even within those cultural bubbles, they were – and
remain – blatantly skewed. The science behind autism has been skewed from its inception.

Psychiatry, a branch of medicine focused on mental, emotional and behavioural
disorders, is at the centre of that established thinking. This fact alone is a problem,
because psychiatry, as that definition suggests, is interested only in disorders, views
anything deemed a disorder as a medical issue, and therefore solely within the
person, and amenable to treatment. Our first questions, then, were “Is this actually a
disorder? Is it solely within the person? Is it treatable?” and immediately on asking
these questions, the whole awkward, tottering construct starts falling apart.
Psychiatry has caused us all no end of trouble, because one error (understandable
given that the science 80-100 years ago was in its infancy) set pretty much everyone
on a path to nowhere. There is a reason nobody has found ‘the cause’ or produced ‘a
cure.’

They were looking for the wrong things, and looking in the wrong places.

An easy example: it is only recently that what are called sensory sensitivities have
become part of the formal diagnostic criteria, yet Autistics have been well aware for
decades that most if not all of us have this sensory acuity. Unfortunately, nobody
thought to ask us. Because they were working on the basis that we are inherently
disordered, it was assumed we were unable by our very nature to be able to
understand or analyse such matters. This is just an example of how the existing science behind autism has let Autistics down badly.

What AUsome Training have been doing is just part of an ongoing project by our
community to undo the errors, reassess the assumptions, consider alternate
approaches, and test their applicability. As our predecessors have repeatedly found,
this approach generates meaningful answers and practical solutions in terms of daily
lived experience, and founded in and based upon long-established scientific
orthodoxy.

There’s a kind of irony in all that – we use the same science behind autism as those whose
conclusions we set out to counter. The only difference is that our starting point is to
accept Autistic people as whole, normal human beings, and to seek answers within
the psychology, psychiatry, sociology, biology and neurology that is applied to non-Autistic people first, only considering the possibility of abnormality if answers from these sources fail us.
The outcome has been extraordinary for sure. We have found that there’s almost
nothing different about Autistic people after all, just a few small divergences in how
we experience the world, which shape how we respond to it… and a giant mass of
personal and social reaction that generates a lifetime of obstruction, hurt and
confusion for us all.

And that’s our mission – to be true to the science behind autism, to accept no answer without
evidence, to give way to no ‘self-evident fact’ or ‘accepted orthodoxy’ without
pushing and pushing and pushing again, demanding to know Why? Why? Why?
And this is our promise to you, our audience, our customers, our friends: We will tear
down our own most treasured theories, shred our most precious strategies, the
minute the evidence reveals them to be false, and we make this commitment
because lives depend on it. Our lives. The lives of our community. The lives of over
250 million good, decent human beings spread across this planet depend on it.

The science behind our autism training