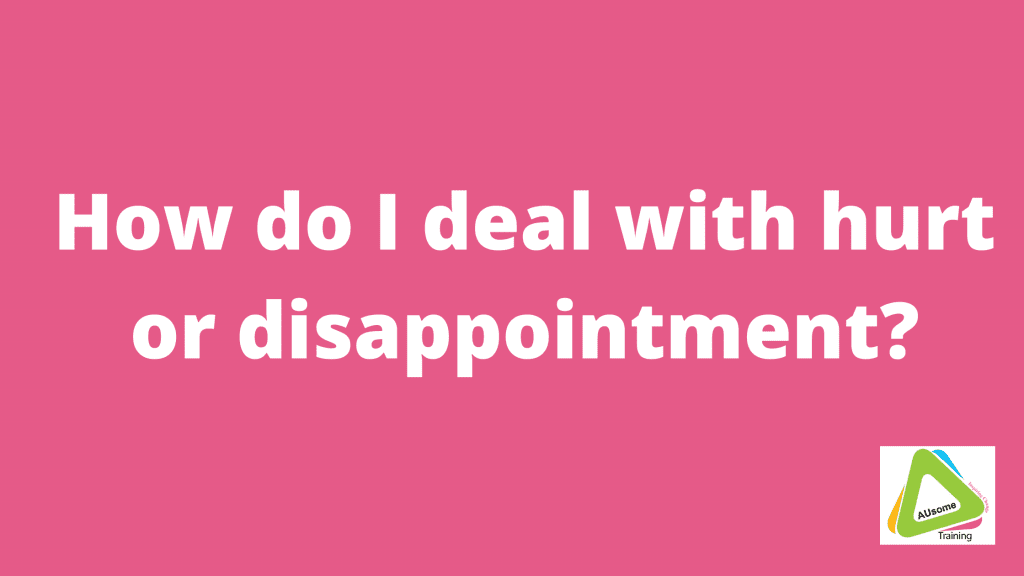 How do I deal with hurt or disappointment?

Not necessarily a New Years resolution but just another progression in letting go of old habits and becoming a better version of myself, healing.

So lately I was talking to my husband about how we deal with hurt or disappointment- I noticed that we often do the thing where we try to pretend to ourselves and each other that it didn’t really hurt us.

We say things like ‘we weren’t that bothered anyway’ if someone cancels or excludes us. Or we say ‘we don’t see them that much anyway’ if someone has hurt us- I thought about these kind of responses and see them now as a way to distract ourselves from uncomfortable feelings of hurt and disappointment rather than admitting to ourselves that we are hurt, we are disappointed or we are sad.

We do this to kids too- it happened over Christmas with my own daughter who was disappointed about a present she received from a visit to Santa. Instead of reverting to my well learnt behaviors from my own parents and other adults in my life and giving the lecture we’ve probably all heard a thousand times about being grateful for what we got, about not being thankless we just said ‘yeah, it’s shit isn’t it when you are looking forward to something and then get disappointed’. And she worked through her disappointment, cried, gave out and that was that.

I wonder how many times in my life I’ve swallowed my hurt and disappointment in order to be ‘grateful’ or graceful or to not hurt someone else’s feelings even though mine are hurt. I wonder how I came to be a 46 year old woman still pretending I’m not hurt when I deeply am.

So for now I’m going to take a leaf from my own parenting book and extend the same compassion to myself. I’ll admit that it’s shit, I’ll sit with the pain and work through it because swallowing it hasn’t done me any favours. Neither has distraction- another old trick of mine!

Yes, there are certain times when we don’t express our true emotions so that we don’t offend or hurt someone else but if we do it all the time we just end up with a stomach full of undigested pain and feelings that keep trying to surface at inconvenient times and give us indigestion in the form of thinking and rethinking or constantly giving out about what the person did instead of dealing with the feelings that arose within us as a result of their actions. We prolong the uncomfortable feeling.

So next time I catch myself having the same conversation for the nth time about how it doesn’t really matter because that person is traumatised/ also hurt/ having a hard time/ not really that important or whatever other variation comes along I’ll catch myself and say ‘you are hurt my darling, it’s shit, and you don’t deserve to be treated like this’

I am packing away all those phrases I’ve repeated to myself and others, uttered in an attempt to make someone feel better like ‘at least you didn’t lose an arm’ when they bang their elbow, and ‘you’re lucky you didn’t do that much damage’ when they’ve been in a car accident – I mean that one always bothered me ‘lucky? How was I lucky to have the accident in the first place?!’

I will also pack away the other platitudes like ‘there’s plenty more fish in the sea’ when all that person wants in that moment is the fish that got away.

Why are we so afraid to grieve? To hurt? To feel disappointed or sad? They are all very much part of the human experience and yet we hush the child who’s crying, promise them something to distract them… and set them up for a lifetime of swallowing their feelings in a world where we all going about pretending we’re fine, wishing we were different and slowly poisoning our minds and hearts with each toxic gulp

How do I deal with hurt or disappointment?