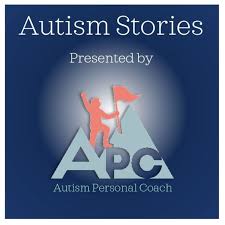 Evaleen Whelton, our founder at AUsome Training, aims to change the false narrative around autism and Autistic play. She recently had a chat with Doug from Autism Stories about how childhood play is often pathologized unnecessarily when it comes to autism.

Doug asks: ​Where does your story in the Autism Community begin?
Evaleen Whelton’s first a-ha moment came 7 years ago, when she was late diagnosed at 37 years old.

“ I don’t have a distinct memory with my first Autistic person online or anything but I started reading other things written by other Autistic people within the first year.

I was lucky that where I’m from in Ireland, in Cork there was a women’s group for women with Aspergers, that was a big part of me reconnecting with myself after years of masking.”

Evaleen highlights the importance of connecting with this autism group, where ‘ah me too’ moments were shared, and where things were figured out together through talks.

“You recently wrote a really interesting article on toys and lining things up in Autistic play. What do you think is the reason why Autistic children’s play is so often criticised?” asks Doug

“Everything we do is criticized,” she says.

“Parents are conditioned into thinking, ‘there are milestones’ there are ‘developmental milestones ’ and that this is what your child should be doing.”

“There’s a lot of pressure,” she explains, highlighting the effect this has on parents.

Change the false narrative around autism and play

“Parents are made to feel ‘if your child isn’t doing this, there’s something wrong’. Let’s start there, the ‘illusion’ of normal, that there’s only one way of doing things.”

Evaleen points out there is no ‘normal’, only a false standard way of doing things which everything else is compared against. This is an unfortunately common misconception especially around autism and play.

“That is what is happening, some children are playing, being told it’s wrong, while that is their way of making sense of the world because that’s what we do when we play. And then they get shipped off to therapy…”

She goes on to highlight the fact that ‘parents worry their child may be Autistic rather than celebrating it.’

“Lining things up is contagious, schools line up in single file, the army, aisles and shelves in supermarkets.

And our need for order as Autistics is sometimes stronger, but that comes back to our level of anxiety.”

Our mission at AUsome Training…

Doug then asks “​You wrote this article on Autistic play on behalf of AUsome. What is the mission of your company?”

“We have a small little mission, it’s to change the world *laughs*

In all seriousness, it’s about changing this very negative story that has been told for about a century about autism because Autistic people have been left out of that discussion up until now and still now we are left out of a lot of it.”

She points out that a lot of information out there about autism and play as well as autism in general is, ‘just nonsense.’

That’s where AUsome comes in, “to give people the correct information, the most up to date information, actually helpful information that will help, if they are a parent to do the right thing by their child and accept their child.”

AUsome have webinars, courses, live online training and social skills resources where you can learn more.

Listen to the 23 mins podcast with Doug and Evaleen
PrevPreviousAnnouncing Jay Jay Mudridge, presenter at our parents conference 21st March.
NextWhy do you believe in autism?Next