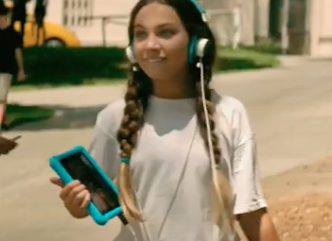 Well let’s start with the trailer which describes Music, the Autistic teenager in the movie as “a magical little girl” . When we are first introduced to Music, we see a girl in her late teens. I’m not sure how many young adults or girls in their late teens we would describe as “little girls”. Unfortunately infantilising Autistics is common practice in wider society so someone must have thought this was a good idea.

The Autistic community did not.

She is also described as “magical”. I’m all for positive images of Autistic people but I do think calling us magical is a bit over the top. It also makes us sound almost not human. “Magical”, “special”…whatever, all these words just take away from the fact that we are human. Autistics need to be treated equally. Depicting us a “magical” creatures really doesn’t help us to be treated as equals. Charities and professionals have described Autistic people as puzzling for decades. . Many organisations thought it was a good idea to represent us with a puzzle piece. Of course, had anyone just thought to listen to Autistic people they’d find out there is no puzzle. We can explain any questions you might have.

Maddie Ziegleir, a non-autistic dancer plays Music. There is no doubting Maddie’s talents. This piece is not about anyone’s ability but rather the ability to get it right. 13 seconds into the video, after hearing Music, a girl in her late teens described as a “little girl” , we see Music walking through the park. Then we see her sitting at a desk using her AAC device.

Now, I advocate for access to ACC so I am happy to see AAC on the big screen. But is this movie portraying AAC just as AAC users would like it to be? Autistics who communicate with AAC have plenty to say when given the opportunity. It’s such a pity that this is a lost opportunity to portray a non-speaking person accurately.

In an interview with Marie Claire Maddie said that her research for this role involved watching videos on youtube which parents posted their Autistic children having “episodes”. Those videos are usually shared without the child’s consent. These “episodes” are depictions of Autistic children in high stress. She also watched autism documentaries. Again, no mention of speaking to Autistic AAC users. This is a bit strange because surely actors usually speak to people when they are trying to get a feel for that character. I can’t help but feel there was an assumption that Autistic people were unable to speak for ourselves? Unable to represent ourselves?

Then there is a music video from the movie for the song “Together”. I really don’t have enough words to describe how bad it is to see a non-autistic person trying to play an Autistic person with motor differences. It just looks so wrong. This video is just a mockery.

Music, moves like someone pretending to be an Autistic person with motor differences. I’m sure that to the non-autistic eye there’s no real difference but to Autistics however there are very distinct differences. I guess it’s like a native speaker of any language picking up on an actor’s poor portrayal.

Peers often bully and mock Autistics because of they way we move. To see someone who is not Autistic mimicking the way our bodies can move can actually be quite triggering for us. It could have been such a different story if an Autistic person was Music. The Autistic audience might have been spared the recalling of traumatic events throughout their lives.

Within 20 seconds we see Music demonstrate facial expressions that are really just a mix of things that you would never really see together on an Autistic person’s face.

Just before the music video kicks in, Kate Hudson who plays Music’s sister tells her “Music, we’re about to have a pool party”. But she does it in a tone that we don’t use for young women. It’s more like a tone you might use when trying to get your five year old enthused for their bath.

Now, that is my thoughts on 20 seconds of a trailer. Yet Sia and some of her fans told thousands of Autistics that we couldn’t judge the movie on the trailer. I found this a bit odd on numerous levels because I was under the impression that this is what trailers were for. I thought trailers were to give potential viewers a taste of the movie. We got a taste and guess what… we didn’t like it.

Sia’s responses to thousands of complaints was to go see it before judging it. Maybe Sia could take her own advice? She should really have got the whole story from Autistic people before putting a portrayal of us out into the public domain based on very narrow judgements.

What did Autistic people say about Sia’s trailer?

Why was a non-autistic person playing Music despite there being many Autistic actors looking for work? When Autistics raised this point on twitter Sia replied to one Autistic actor by saying “maybe you’re just a bad actor”.

So let’s break this down a bit and see why Autistic people wanted an Autistic person to play the part:

Autistic people always have other people speaking for us, whether it’s professionals, charities or parents. There is always someone speaking on our behalf.

Why should an Autistic actor play the Autistic character?

Some comments from Sia fans actually represented some of my own thoughts the first time I heard this debate. I have a background in drama and taught acting for many years. When I first heard the idea that Autistic characters should be played by Autistic actors I was a bit taken aback. It’s acting, I thought to myself. The whole point of acting is that we can portray a character without actually being that character. If we followed this train of thought then no one could play any characters because we’re basically saying that people should only play themselves. I have to admit that it took me a while. I was new to the Autistic community and I was new to the rights of disabled people in general.

I found comparing other marginalised community’s struggles a good way for me to understand this. What was it like for Black people when white actors played their parts and blacked up their faces? What was it like when straight actors hammed it up? How do LGBTQIA feel when they see stereotypical, one- dimensional versions of themselves on screen? Whether we mean to or not, when we cast others in their stead we are sending as message to a minority that you are incapable. We are saying that you are not good enough. We are giving a message that someone who is not like you can play you better.

Autistics get the message that we are not good enough several times a day.

Some fans referred to Autistic complaints as “Cancel Culture”. It seems that some people think that marginalised communities voicing their concerns over misrepresentation are basically just a bunch of whiners, wanting to cancel things they don’t agree with. In 1660 the first woman took to the stage. Was this also “cancel cutlure”? When woman got fed up of stereotypical, mocking depictions of them on stage played by men giving a man’s version of womanhood?

If a film does so much damage to a minority then it may need to be cancelled.

Theatre and film have a unique ability to connect with people and are powerful mechanisms for changing perspectives. Anyone involved in theatre or film has an obligation to portray minorities accurately. And let’s face it, the past record is not good on that front.

Sia did say that she cast 13 “neuroatypical” actors and also said that she thought employing someone on “Music’s level of functioning would be cruel”. This is a major assumption. It also shows a deep misunderstanding of the reasons some Autistic people do not speak.

Sia said that she did consider Autistic actors but it’s difficult to see how an Autistic actor was ever considered for this part. Maddie Ziegler told the press five years ago that she was playing this part. This was two years before Sia said she started her “research”. When questioned on her research by the Autistic community it quickly became clear that “research” did not include Autistic input. The Autistic Community could’ve happily taught her that functioning labels are rejected by our community. She would also have learnt that this is no way to portray us.

The interview that told us more than Sia realised

Then there was her interview, three weeks ago with Erdem Gunaltay which is available on youtube. In this interview she describes Music as “low functioning”. The interview concentrates more on Maddie and her own ability as a director rather than focusing on any of the “awareness” she now claims to be trying to raise.

She brags about it being a “funny place to be” to have a budget of 16 million. Sia talks about how she felt “super supported” and tells us that she spent a lot of her career doing things herself. It’s regretful that she did not spend any of that budget on liaising with Autistic people. She missed that opportunity to empathise with our community. My Community have been doing it all ourselves, giving our time and energy, often at the cost of our own mental health and physical well being to educate others for decades.

She talks about her love of psychology which is a little ironic seeing as she was unaware of the damage her movie could create but also the idea of Neurodiversity hasn’t come across her radar.

She wants people to know there’s “someone in there”. This is just a really inappropriate thing to say. Autistics have been battling the idea that there’s a real human trapped inside us for almost a century. There are abusive practises or “therapies” used against Autistic children based on this awful idea.

We can tell a lot from Sia’s use of language in this interview. It just shows how little she knows about Autistic people.

She also said that she wants people to show compassion. Yet she has shown very little compassion to the very community she claims to want to raise awareness for when we raised our concerns. In fact her exact response on twitter was “Grrrrrrrr. Fuckity fuck why don’t you watch my film before you judge it? FURY”

Not exactly a compassionate response.

Sia tweeted “special needs are now called special abilities”. And she mentions the same phrase in the interview. But actually both terms are rejected by any disabled people I know.

This film is yet another example of someone with good intentions getting it wrong because they didn’t ask Autistic people how we’d like to be portrayed. It is just such a lost opportunity both for Sia and the Autistic community. This film is just another abomination of good intentions gone badly wrong. With a budget of 16million and 15 years to make this right it’s a huge kick in the teeth for our community.