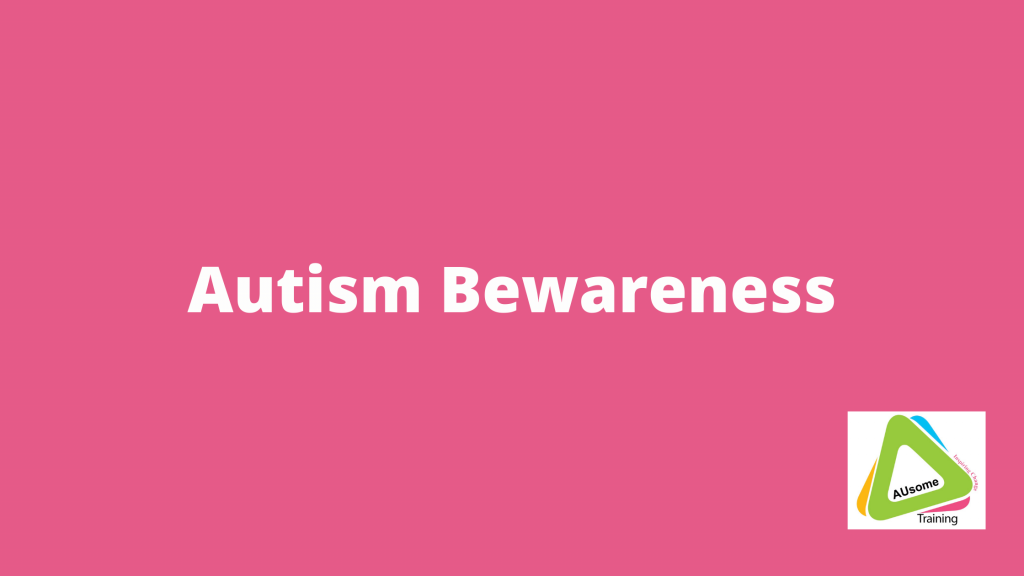 Let’s talk about autism awareness. Autism Awareness campaigns were set up by charities who wanted to make people “aware” of autism. If people are aware of a cause then donations can come easier than if people do not even know something exists.

Autism awareness campaigns are clever marketing tools. Such campaigns seek to make people aware of the terrible thing that is autism (according to them). They successfully made people aware that autism is a “lifelong developmental” condition or disorder. What did they base this on? Medical ideas that never included the Autistic perspective.  Many “awareness” campaigns highlight the “symptoms” of autism. Others highlight the “epidemic” growth of the terrible autism.

The Irish Society for autism tells us “On December 18th 2007, the United Nations General Assembly adopted resolution 62/139, declaring that April 2nd of each year will mark World Autism Awareness Day (WAAD). The declaration expressed deep concern at the prevalence and high rate of Autism in Children in all regions of the world and the consequential developmental challenges. It called on all countries, UN bodies, international organisations, and non-governmental groups to take steps to raise awareness of Autism.”

Reading this description above might help you to see why many Autistic people do not want autism awareness or as I heard someone call it last year “autism bewareness”. Bewareness is actually much more fitting a description for most of these campaigns.  Many charities promoting this bewareness invest in finding the cause for autism.

Autism awareness does not help Autistic people. It promotes the idea that Autistics are eternal children. Many campaigns focus solely on children. Many ignore the fact that 75% Autistics are adults. How is that helpful? Many simultaneously promote the abuse of Autistic children through ABA and other mistreatments while pretending to help Autistics. How aware are the people promoting autism awareness of the realities facing the Autistic Community?

With all this awareness then surely Autistic people would have better lives. Why is our average life expectancy anywhere between 36 and 54 years of age and why do we take our own lives NINE times more than the average population? And while we’re at it, how many “awareness” campaigns are bothered to highlight these issues? Most will focus on helping you to identify the Autistic child earlier so that they can be subjected to “interventions” to make them less Autistic.

What happens when Autistics complain about this sort of awareness? When we highlight our distain for symbols of our oppression like the puzzle piece and the colour blue? Well, quite often we’re told not to be so ungrateful. We are told that any awareness is better than nothing and that we should not say anything against those who are trying to help us.

Autistics have every right to take issue when we are misrepresented. We have every right to highlight our oppression and to voice our concerns. We do not have to show gratitude to those who oppress us through misplaced intentions and ignorance. We do not have to sit down, shut up and be quiet while the world has a conversation about us on April 2nd without including us in that conversation. Ignorance is never an excuse for oppression. “But they don’t know any better, you should educate them” is a common response. Or “they mean no harm, it’s well intended”.It is not up to an oppressed minority who have been ostracised, pathologized, experimented on and excluded for almost a century to educate people who actively exclude us. It is not our fault or responsibility when others exclude us. If they exclude us they exclude us, it really doesn’t matter how well intentioned that exclusion is, does it?

“Any awareness is better than nothing” we are also told. Any awareness is not better than nothing because that is not how human minds work. Once we have an idea in our minds about something then it is harder to change it so actually no awareness would be more helpful. Then at least people could have open minds about what being Autistic is and not some archaic idea of a boy child locked behind a pain of glass.

In Ireland our Department of Justice & Equality funded Shine Ireland under the Disability Awareness Grant Scheme 2015 to create a website dedicated to increasing autism awareness.

The eight Autism Awareness modules cover a wide range of topics from the Autism Spectrum and the Triad of Impairments to how an autism diagnosis affects the family. The modules also cover the areas of communication, sensory issues and the growth in autism prevalence both nationally and internationally. During this autism awareness presentation the user will see that autism is a very complex condition that affects individuals with varying degrees of severity.

Where is the Autistic perspective in this site which is meant to promote autism awareness? Unfortunately like many autism awareness campaigns they seem to have forgotten to ask Autistic people about how they’d like to be represented. This is exactly the bewareness which Autistics do not need. The information on this site is inaccurate, oppressive and at best outdated. Some of it is actually harmful to Autistics. But that doesn’t matter right? As long as government department can tick a box and a charity got some funding. Where do Autistics fit into all this? We don’t. We are excluded and misrepresented. And then we have people tell us that we ought to be grateful for this.

If not autism awareness then what?

This is where Autism Acceptance comes in. When we talk about Acceptance we include Autistics. Surely anyone using the word Acceptance would realise that the opposite of it is rejection and that is how Autistics feel on a daily basis. We feel rejected as we are. There is always some intervention, some book, some course, some magic cure that will claim to make us less Autistic. There is nothing wrong with being Autistic and Autistic people if anything need space to be more Autistic. Many of us hide our stims, our pain and discomfort so that others can feel more comfortable around us. We mask our precious true selves so that the world won’t ridicule them and hurt them any more.

Even better than Autism Acceptance is Autistic Acceptance because then we are totally moving away from this oppressive and inaccurate medical idea of “autism”. Autistic people are not made up of deficits. We are fully whole humans who need to be seen as equal to everyone else. The challenges we face are mainly created by our environment.

If you need to be aware then please be aware that Autistic children and adults are:

Autistic people are a minority who have been unnecessarily pathologised for over a century. We do not need puzzle pieces or autism awareness days where the world mourns our existence and warns parents on how to find us early so that they can make us less Autistic, I mean support their child with autism. What we do need is equality. We need people to see us as equal, full humans who play an active part in our society.

We need you to be aware that many autism awareness campaigns are really bewareness campaigns which only further oppress us. That much of this “autism awareness” is a marketing tool employed by businesses who want to appear inclusive without actually including the people it claims to include. We need you to realise that a lot of awareness campaigns actually harm us. They damage us and they damage the work being carried out by the Actually Autistic Community for decades. We need you to empathise with us when we don’t celebrate “autism friendly” hours in supermarkets. Let’s face it, when you look beneath the glossy marketing tool then you will see that if a premises is accessible to Autistics for an hour or two a week then it is inaccessible the rest of the time. Are we really supposed to get excited when a business highlights that they are affording us our human rights for an hour or two a week?

We also need you to be aware that there is an unhealthy stigma around our way of existing. Parents are warned of the “red flags” of our way of being, media and charities add layers to this stigma. People pity parents who have us as children instead of kids who are not Autistic. Think on that for a bit. Think what it feels like when we hear people commiserating with parents for having kids like us. That is discrimination by the way. We don’t often notice discrimination when it’s been ingrained in our society for so long and when those we discriminate against have been robbed of a voice to represent themselves.