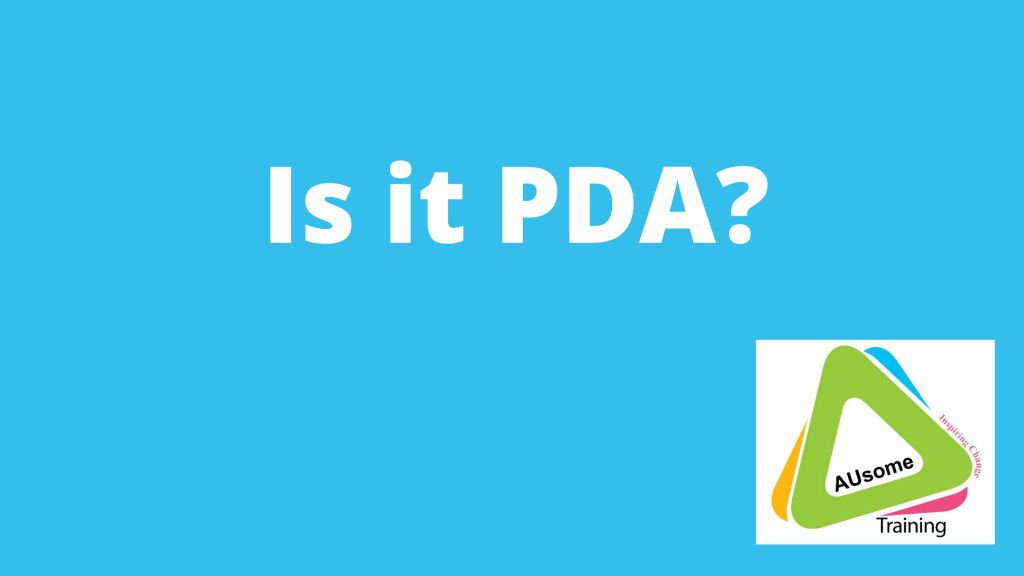 Is it PDA (Pathological Demand Avoidance)

Is it PDA? This was a question recently posed at our Autism and PDA Course. :

Is PDA a possible reason why a pre-schooler anxiously avoids peers due to
interactions with other children being so random and uncontrollable. They also
defensively avoid academic activities e.g. will not hold a pen – the demand to
do it “right”? In the playground they will play with younger children but has a
need to be the best/ fastest etc. and if not gives up or avoids any strategies to
support these anxieties?

Stiof MacAmhalghaidh, presenter and Subject Matter Expert here at AUsome Training has written this response to give a very detailed answer:

There’s a lot packed in to all that. A quick answer: Yes. It is possible. Which is also a
kind of non-answer.

There are three things going on here. First is about avoiding peer interaction. This is
a not uncommon Autistic choice. Certainly randomness and uncontrollability are
factors to consider. However kids vary, and their rate of development varies also, as
does the rate different characteristics develop. Autistic kids tend to race ahead in
appreciating the nuances of emotion and lag a bit in understanding intention. Give it
a few years and the other kids catch up (mostly) on the emotional side, and Autistic
kids catch up (mostly) on the intention side. So, in this instance a kid can avoid
interaction just because they are reading subtleties others are not even conscious of,
and that goes both ways. This is at the heart of the ‘double-empathy problem’, that
communication (and all interaction) is a reciprocal process of feedback, and humans
– especially preschool age humans – are really not that great at reading each other
unless they have a lot in common in terms of worldview and state of personal
development (which shapes that worldview). The lack of interaction may have zero to
do with demand avoidance and more to do with just not wanting to engage with
people you don’t ‘click with.’

As many Autistics can attest, there’s a lot to be said for doing stuff on your own. You
get to choose what to focus on, decide how engrossed to get, and gain a lot of
understanding and straight-up pleasure from doing that.
What gets called PDA is a possible cause for lack of interaction, but it is unlikely, or at
least less likely than other pervasive causes.

The question of pen grip is one lots of young kids struggle with. I’ve watched people
hold a pen “wrong” right into middle age, or adjust their grip as teens or in their
twenties, or find that fatter pens, triangular pens, grippers etc. make all the
difference. Also while there is an ideal pen grip that allows for precision and speed
and minimises tiredness, it is not some law all must comply with, and many people
manage quite well with something that comes more naturally. My first thought on
this point was that there’s a fine motor or grip strength issue at play, and there’s
well-established techniques to address that, and considering that angle may reveal
other strength, balance and motor skill issues that currently are less evident.

As regards the refusal, that is an act of assertiveness, a sign of will. It is
communication. The message is that for some reason that ‘ideal grip’ does not work
for them, and they are not afraid to let you know. That’s a cause for celebration if
anything. There’s an assertiveness there to be fostered, not suppressed. I mentioned
the search for root causes in the previous response, and the value of digging deep
into the chain of causation. Often we are encouraged to find The Cause in an
immediate precursor, when it may lie several layers down, or simply be unobvious to
us because we are asking the wrong question. Exploring the Why and leveraging the
child’s own perspective helps greatly in unravelling all that. A simple ‘why do you like
to hold it like that?’ followed by exploratory questions (does the pen slip if you hold
it this way? Is it easier to draw like this?) can help bring out the child’s voice. I’m
thinking here of a kid I knew years back who held their pen awkwardly, and it turned
out they had a small wart on one finger that was barely visible but that was making
‘proper’ grip uncomfortable. Humans do things for reasons. Humans do the best they
can with what they have. Seek out the function of what a person is doing.

So, is that PDA? Unlikely, but it might be in part.

Third, playing so long as they can be the best. That’s a confidence-perfectionismcompletism scenario. When you feel judged (and remember Autistic kids are usually
way ahead of their peers in reading emotional nuance) or feel excluded in some
other way, ordinary activities take on significant levels of importance. The meaning
attached to performance gets elevated, ‘success’ involves clearing a higher bar than
for others. It feels like being the best is the only way to feel acceptable, to feel
allowed to stand with your peers. If you can dominate, who would challenge your
right to belong? It is a pretty commonplace human rationalisation really. I point to a
gazillion instances of warfare and abuse and violence as evidence. The principle is the
same. It is so commonplace we’ve tamed it into ritual in the form of sport.
I suspect that a lot of Autistic (and many other marginalised minority) people reading
this will be familiar with the sense that trivial activities carry huge significance, that
ordinary things are high-stakes, high risk. It is near impossible to see unless you are
‘inside’ because we each attach meaning to events and things from our individual
viewpoint.

Is that PDA? In the playground they will play with younger children but has a
need to be the best/ fastest etc. and if not gives up or avoids any strategies to
support these anxieties.

Is that PDA? Of the three examples, it is the one most likely to be. The ‘demand’ in
this case being to be acceptable to peers, and the ‘avoidance’ lying in an assessment
of where the level of performance needs to be to gain that acceptance. Looking at it
all in this way, we need to pause and reflect on just how nuanced and aware a child’s
sense of self, dignity, interpersonal interaction needs to be, how deep their
appreciation of layers of intent and judgement needs to be, and how acute their read
of others’ emotions needs to be, in order for this to take place. That’s a lot of
personal development for a pre-schooler on the face of it, but it is (as I and others
can attest) entirely possible. But is it PDA? Call it proto-PDA maybe. Drop the ‘P’ and
call it demand avoidance. Suddenly it becomes rational and functional. Not ideal, but
functional. In that case, this kid needs support, encouragement, a sense that they are
indeed included and respected, and certainly are not being judged. This is where
normal human demand avoidance is close to transitioning to a chronic default
response, and attaching a three-letter label to them doesn’t really help. The kid likely
feels vulnerable, unsupported, unheard, inadequate. Focus on addressing that, on
building confidence and fostering their evident determination. Doing so will dissipate
the urge to over-perform and to distance from risky scenarios.

PrevPreviousTop 10 Things you need to know about Autistic children
NextAutism and PDA: Life with PDANext

Is it PDA (Pathological Demand Avoidance)