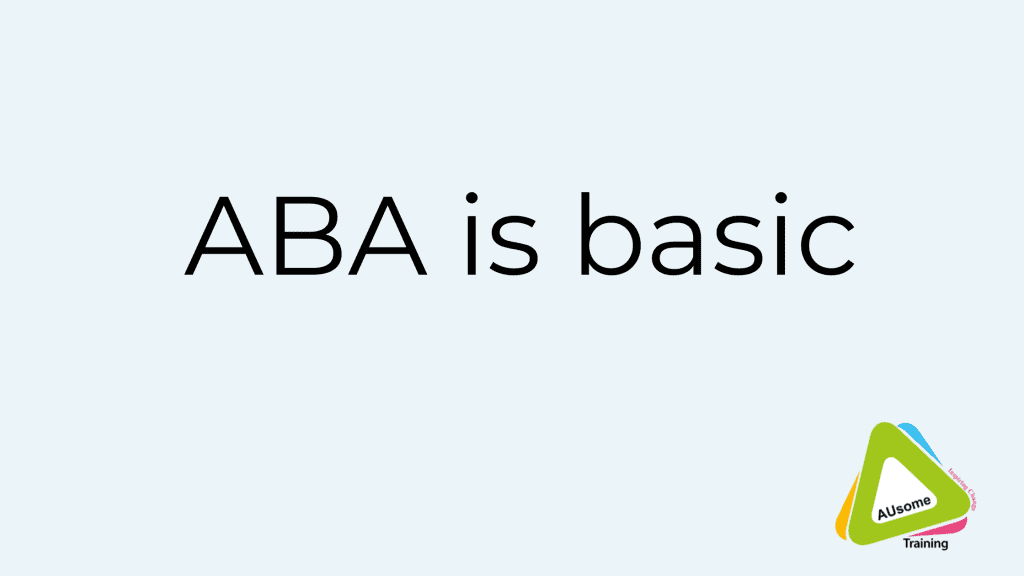 Like really really basic, the most basic of basic we can find. The very bottom of the pit.

Calling it science- well ok – if your definition of science is a two year old noticing that ice melts when it gets warm cos that’s the level of “science’” here folks. Actually sorry two year olds. You are miles ahead with your observations.

It’s basic because it is simplistic in its origins and basic in its understanding or not understanding that human beings are not just a bunch of behaviours.

It may identify trauma triggers but it’s so basic that it doesn’t understand trauma triggers, instead it calls them a scientific sounding word called “antecedents” , I mean how scientific is that – to look for the one thing that happened just before- and not the many things and the origin of this stress. But you see the origin is irrelevant when you just want a person to comply. Hardly “science” folks . That’s like saying “science” shows me that humans were created by giving birth

Ooh let’s do some science stuff. Let’s look for the “antecedent”. Now it can’t be too complex, it has to be something I can observe.

What went before this child being born?

Let’s get really scientific here people – this is real science- the science of behaviour!

The antecedent was childbirth therefore….with my very scientific research I can confirm that  childbirth causes people.

Yep there you have it, a very basic “science”

It’s a heavy book with lots of science stuff in it. i’ll just flick through these big important pages.

Ok,. got it, ok so the antecedent was some dust in the air

So that’s the cause of the behaviour, ok, coz that’s what it says in my big important science book that someone told me is science so it is, ok.

What? allergies can build up over time? No, sorry it doesn’t say anything about that in my big book of science.

It also doesn’t say anything about the human body and how sneezing actually works but that’s ok because science doesn’t need to look into everything. We can just decide, that’s our way of doing science.

My big old book of ABA spells, I mean science says that a baby crying is a problematic behaviour.

The baby is crying coz it’s a behaviour. It’s definitely not a baby communicating something to us. Nope it’s a behaviour and the best way to deal with behaviours we don’t like is to ignore them.

So ABA says let the baby cry, ignore them and they’ll learn to self soothe

What’s that you say? Baby’s communicate with their cries- I don’t see that in my science book so therefore it cannot be science

What’s that you say? Neuroscience and tons of research on the human nervous system shows us that children learn to self sooth by being soothed? No that’s not in my massive book of scientific facts never to be questioned ever, especially by science. So that’s wrong, coz what I do is science

So best thing to do is leave the baby who is making annoying noises to themselves, that way they’ll learn that their cries don’t matter and they’ll give up crying, I mean learn to self soothe. Ok, so that’s the crying bit done.

What? you think it would be a good idea to cuddle the baby who needs to feel safe? That’s not in my book of science so no and I’d appreciate it of you believed in my science and stop questioning my big fat book of science stuff with your pretend science. My science is real ok. It’s real coz it says so in my book.

Let’s science some other stuff

Ok, let’s science some kid lashing out. Oh that kids needs to learn how to behave.

I’ll science this with my science and my huge, enormous, very important science book and I’ll use a very complex thing called ABC- I know it sound simple coz it’s like the first three letter of the alphabet but it’s really really not simple ok. If you haven’t studied the science of ABA you won’t even be able to understand it, it’s really hard and really really scientific. ABA is complex, it’s a science coz it says so in my science book of ABA science.

So if you just stop talking I can science you ok?

Ok so in my book it shows me very scientific ways to identify behaviours. I guess, but it’s a scientific guess you see, based in science and on my very own subjective idea of what human behaviour is. But I studied ABA and I’m like super good at seeing and understanding behaviours especially the bad ones.

What? There are no good or bad behaviours? Behaviour is communication. No, no it doesn’t say that in my book. You just don’t understand the science you see.

What? You recently heard Gabor Matte talking about “acting out’ being what we do when we can’t articulate? It was a really interesting lecture on stress and learning and communication? Hardly! Gabor Matte doesn’t understand the science you see. He hasn’t studied that ABA stuff I have. My science is right coz you know- it says so in my big big huge enormous book of scientific things.

Anyway let’s get back to the science

So a child is lashing out. I identify the behaviour and then I do some very serious science stuff. I tick some boxes in my manual, very sciency, ok, I’m like a real scientist except I don’t wear a white coat but I do have a clipboard so like I’m totally almost like a scientist.

So anyway back to the science – the behaviour is that the kid is lashing out. I do my in depth analysis and hey presto I see that getting noodles for dinner was the antecedent. Yep the noodles did it! Those damn noodles are at it again. So I’ll do some more important science stuff now and I’ll show that kid another big science thing- it’s called consequence. It’s ok if you don’t understand how this works.It is very complex and if you think it’s wrong then that’s coz you can’t possibly understand the science in all of this, ok? Anyone who says this is wrong just doesn’t understand it. That’s what I’ve been ABA’d into thinking, I mean scientific’d  into thinking, ok.

So anyway if you’ll just let me get on with my science I’ll teach the kid about consequence.

What? Doesn’t the kid already know the consequence coz they’re like still hungry?

Not that consequence, I must teach them another consequence. The science one, ok?

So after the behaviour comes a consequence. And the consequence this time is that they don’t get to watch tv.

What? they’re already hungry and now they can’t chill out after the “behaviour”

Of course they can’t chill out, that would be rewarding them for bad behaviour.

But what now? You think it would be better to just cook them some food you know they’ll eat and meet their needs? Don’t be ridiculous , that is totally unscientific. Don’t you know what happens to kids who get their needs met? They don’t learn to respond to punishments and rewards and that is all humans need. It says so in my enormous, huge in fact, very heavy book with lots of very important pages.

What? What do I think about gentle parenting and trauma informed approaches? I think they’re unscientific that’s what i think

But what now? What about the decades of research showing how damaging rewards are? Don’t be ridiculous  the only science that exists is in my super duper very fat book here. You just don’t understand my science ok. But’s it’s like really really hard and really really very very scientific so I get why you don’t understand.

So anyway, let’s teach the kid about consequence and ignore the real life consequence that they are actually still hungry. Sure it would be easier to feed them but that’s not what it says to do in my book and I must comply, I mean follow the science.

So now let’s science the kids who can’t tie their shoelaces. ABA is so good at teaching life skills ok? All we have to do is break it down and give them a reward each step of the way. So let’s break it down. Put on your shoe, good good doggy, I mean good kid… and now hold one lace up, here’s another treat , I mean reward and all you have to do now is hold one lace under the other. Oh you can’t do this, that’s ok we’ll give you a reward for trying. Lets’ try again.

What? she looks tired and frustrated? Don’t worry about that. Follow the science, they’ll learn this way and my science has no place for emotions coz it’s science you see, behavioural science, the most sciency science there is.

What? Would it be easier just to buy her slip on shoes? Are you serious? You don’t obviously understand the sciency stuff I’m doing here. I’m teaching life skills.

But what now? What about motor neuron conditions? Well, that’s not in my very great, huge in fact, impressive book at all! But ABA is and it tells me that I can teach anyone anything if I just keep at them they’ll do as I say eventually.

Won’t that come at a huge cost to their mental health and wellbeing you ask? Tish tosh I say I must get on with my science.

What? Lots of dog trainers have even turned their backs on ABA? Ah that’s coz they don’t understand the science they once learnt and believed in.

For my very last trick I will make a child who can’t communicate, communicate.

What? Everyone can communicate? Not really, I mean it’s not real communication if its’ not the ABA way

Ok, so I’ll teach you PECS. PECS is an ingenious way to make kids to communicate. First you have to ignore all their other attempts to communicate ok?

And then you give them… ta dah… some pictures. But they can’t just use them when they need them, they must use them all of the time ok? So here’s what you do- say for example your kid walks to the fridge, opens the fridge door and points to a bottle of orange juice. You must ignore the fact that they walked to the fridge, opened the door and pointed to the bottle of orange juice coz that’s not real communication you see, thats’ not science. The sciency way is to ignore their first communication and make them close the fridge and wait until they get so thirsty that they have no choice but to point to a picture of orange juice. Then you do the science thing again and reward them by meeting their very basic needs.

What now? You think this is ridiculous? That if you already understand your kid then you shouldn’t let them suffer and only meet their basic needs if they ask for a drink the ABA way?

What about AAC? No it’s ABA and ABC, no AAC here ok.

Now you’re getting the science

My science is compliance so you can’t teach compliance any other way. You have to deny kids their basic needs, use them as motivators so they do exactly as instructed by the ABA science stuff.

What? Do I think I’ve been ABA’d into compliance? No way – this is science not compliance but it’s complicated so I totally get why you don’t understand it.