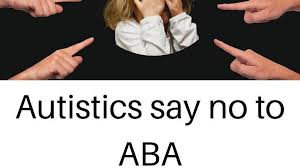 ABA: A story of Autistic Abuse

If ABA is so great then why is the Autistic Community campaigning against it? Chris Bonnello from Autistic Not Weird conducted a survey in 2018. The questions on ABA showed that many people, even those who are not Autistic themselves are opposed to ABA.

There is much ‘scientific evidence ‘ to back the claims of the ABA industry. It’s important to note that all of this “evidence” comes from the ABA industry itself and that there is no longevity study on its negative effects on the children who were subjected to it.

This will take a lot of explaining so bear with me as a try to simplify our story.

Long time ago ‘scientists’ and ‘psychologists’ thought that they knew everything about Autistic People. They decided that Autistic people were not real people , that Autistic children weren’t real children. They told the world that we were shells of ‘normal’ people or that we had ‘normal’ people hidden inside of us. They told the world that we needed to be taught how to behave like ‘normal’ people. They understood very little about Autistic people and that our ‘behaviours’ are actually our way of communicating and part of our way of being.

But their voices were loud and everyone listened.

The world believed these tales. So then Autistic people all over the world were subjected to horrific treatments based on these ‘scientific fairytales’.

Not so long ago someone decided that Autistic children can only acquire life skills between the ages of 2-5yrs. So now there’s a scurry to train (or force) Autistic kids to behave like the normal ones before they hit 6years old when apparently will never learn anything again. Therefore they will have to remain a shell of that ‘normal’ child forever or that the ‘normal’ child will be locked inside the Autistic child forever. The language that is used is different but it basically says the same thing as was being said a long long time ago.

Now, the language we use is very important because I hear people comment all the time how much a child has ‘come on’. Now what exactly do they mean by that? That the child is developing and blossoming in a beautifully Autistic way or that the child is behaving and learning to be more like the ‘normal ones’?

ABA is based on training Autistic children to be non-autistic. It trains children to behave. ‘What’s wrong with that?’ I hear you say- ‘doesn’t every child need to learn to behave?’ (I will leave my personal philosophies about how we damage our children out of this discussion and focus on Autistic children only). ABA training also teaches them that their natural behaviour is not acceptable. That their way of Communicating is invalid and that their way of existing is wrong and that they need to be like the ‘normal ones’ to be accepted.

ABA also forces children to go against their natural impulses and instincts. It trains them to put the needs of others above their own. It dismisses them as real people.

‘ABA does not do that’ – a common defense from ABA enthusiasts , that usually comes after they have distanced themselves from the horrific work of Skinner and Lovaas. They claim that ABA is now much better and much safer to be used on Autistic children. (And let’s not forget that it is abuse of children- it is not based on a correct understanding of Autistic people but the scientific fairytales I spoke about earlier).

In a time not so far away , ABA was used to suppress Autistic stimming. Thankfully most of the ABA enthusiasts now recognize that was wrong (although it is done in many places still). Autistic people worldwide are still waiting for an acknowledgment and apology for the damage ABA has done to them but apparently it is acceptable to abuse autistic people without any recompense.

Nowadays ABA enthusiasts know they may not get away with suppressing stimming.
So now ABA seeks to train children’s ‘actions and skills’.

So they focus on training Autistic kids to do things like to play ‘appropriately’ and by appropriately they mean ‘like the normal kids’.

So … scientific fairytales tell us that non-autistic kids learn through play. No one teaches them to play, they just play and everyone believes that they’re effectively teaching themselves through play. Now the Autistic kid plays in their natural way and that is called ‘inappropriate play’ because… well because it’s not the same as ‘normal’ or non- autistic kid’s play. So fairytale authors ‘analyze’ Autistic kids behaviour and decide that their way of playing couldn’t be teaching them anything valuable because it looks so different to ‘appropriate’ play. When I say “analyze” I mean ‘judge’ because I’ve yet to read a detailed and correct analysis of Autistic play. They can’t believe that Autistic kids are effectively teaching themselves through their own way of playing.

What is Autistic behaviour?

True analysis of Autistic behaviour cannot actually take place without explanation from autistic people. Unfortunately Autistic people and their voices are regularly ignored and silenced by ABA enthusiasts. I always find this difficult to understand especially as they claim to want to help us, why wouldn’t they want to improve their treatment? … but then again I am Autistic so only logical thinking makes sense to me.

Often ABA fails to recognise signs of trauma in Autistic children and their “therapy” only adds to this trauma.

Now you may think I’m being very cheeky by calling scientific evidence a ‘fairytale’ but you see I have a scientific problem with this ‘evidence’. Maybe someone can solve it for me. The evidence is based on the sample of one. The individual child. Now how can you possibly, ‘scientifically’ prove that exact one child has an improved existence after ABA against that exact same one child’s existence having no ABA but developing naturally and learning skills as every human does over time?
Also how can you ‘scientifically’ measure the claims made by ABA enthusiasts that it improves Quality of life for the Autistic person?

What have we to gain?

Why would we be opposing something that can help, support us and make our lives better? Obviously because it is not doing any of these things and is in actual fact harming children and adults on a daily basis.
There are numerous accounts of PTSD caused by ABA training. Henny Kupferstein’s research shows 42% of children subjected to ABA developed PTSD. That’s almost one in two children. I recently interviewed Jay Jay Mudridge on their negative experiences with ABA as a child and teen. The interview is available to watch here

Why does it look to me as if Autistic children are not protected under Child Protection Laws in Ireland and elsewhere?

What do ABA enthusiasts have to lose by arguing against us?

Well it’s a business so there’s no need to expand on this one.

ABA is abuse of Autistic people.

Please support Autistic people to find their happy ever after. If you’d like to know more about ABA then there is a huge resource available here

ABA: A story of Autistic Abuse