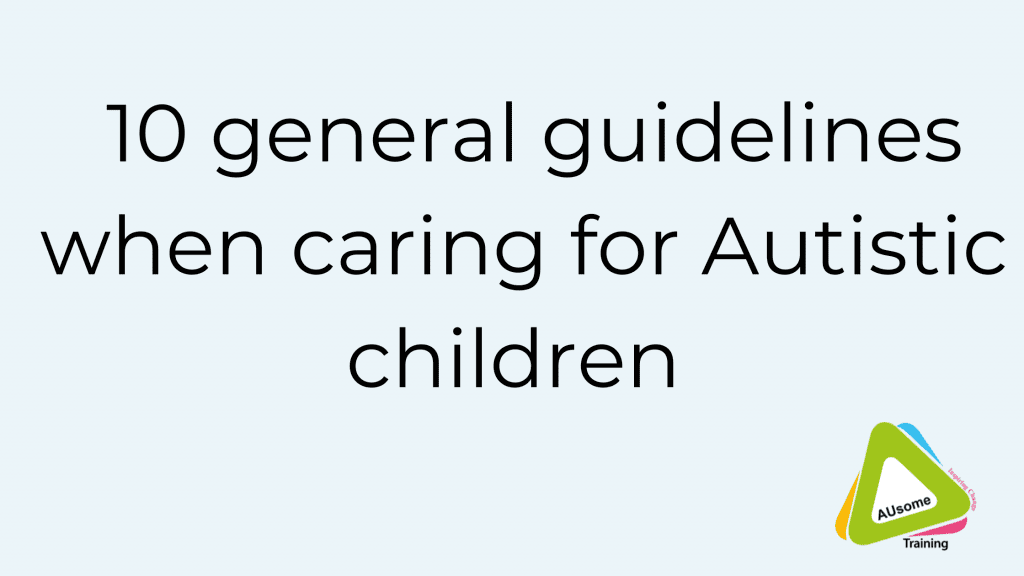 1. This is hard to hear but the reality is: If you are not trained by
Autistic people about Autistic people then you might need to
question what you actually know about us outside of secondhand,
poorly researched ideas. The “expert” world of autism is full of
poorly thought out and untrue ideas about Autistic children and
adults. If your information doesn’t include Autistic perspectives
then it’s really not Autistic-informed. What do we get when we have
something about Autistics that is not informed by Autistics? Well,
we get the same things as we do when we don’t include any
population in facts or theories about them- we get poorly
researched and bias opinion pieces based on even more poorly
thought out and bias opinion pieces. We get “approaches” that
actually harm instead of helping.

2. If you are using any program that claims to be “evidence based”
but forgot to get any “evidence” from people who are Autistic and
have experienced it, well then it’s not evidence based and you are
using it on children. Yes, we know no one wants to admit this but it
is unfortunately the reality we are facing right now.

4. Autistic kids should also not be having meltdowns. We know,
you’ve been told that “autism” causes meltdowns but here again
we need to look to the environment and to remember that Autistics
are humans too and so if you put us into a negative environment
well then we are going to respond negatively. A negative social
environment is one where Autistic kids are treated as “other”, are
forced to comply and where their signs of trauma and distress are
disregarded as “autism”.

5. Autistic kids and their autonomy should be respected at all times.
This includes- freedom to move their bodies any way they need to,
stimming, making sounds and moving as human beings generally
do. Children need to move. The human body is not designed to sit
still. The idea that Autistic kids need to sit still to listen is an
example of another poorly thought out idea. We can all move and
learn. As an adult you can ride the bus or drive a car while learning
something from a podcast or radio. Why is it then that we are
made to believe that children learn best when sitting still when it
goes against every human response we have?

6. Autistic children’s accommodations should NEVER be withheld
from them. This includes but is not limited to ear defenders,
movement breaks, their special interest and their communication
devices. Accommodations are a way to include people who were
excluded before. Using necessities for inclusion as rewards… well
that should not need any further explaining should it?

7. You should easily spot an Autistic child in early signs of distress so that the situation doesn’t escalate. If you don’t know how to do this then again, ask Autistics. There are always signs that a child is in distress, please don’t put obvious signs of distress down as
“autistic behaviours”.

8. You should easily know what a child’s non-verbal communication
means, this obviously includes “behaviour” because that is also
communication. Again, focus on the human child in front of you.
You are human too and therefore you can connect with the Autistic
child as long we you remember they are humans doing human
things in very human ways and not some magic manifesting itself as “autism”.

9. Autistic children are highly effective communicators and you need to presume competence that they are capable of many things. Anything based on assumptions ‘they wouldn’t be able to…” need to be eliminated from your vocabulary. If you are under the illusion that Autistic children need to be taught how to behave then you are misreading their signs of distress. If you misread their Autistic communication and believe they need to be taught how to interact then you need to up skill on Autistic communication and on what trauma looks like in children.

10. ABA and other derivatives like positive behaviour supports,
social skills training go against human rights and should not be
used against Autistic children. If you are using any of these
methods then maybe it’s time you took a look at the “evidence”( no
evidence if it’s not from Autistic people). Yes, we know, someone
told you that these are best for Autistic kids but who has ever
asked Autistic kids what these approaches are like for them?

Where is the evidence in these award-winning “evidence- based”
programs? We know, the thought never crossed your mind to even
think that Autistic people should be asked about issues facing
Autistics. And that is something you will need to address in your
own time. Why did you think parents and professional’s opinions
mattered and not once think to ask “what about the Autistics?”
If you have never asked this then you have unconscious bias. This is something for you to address and we hope that you do it soon so that you can start to meet the needs of Autistics instead of everyone else around us while our pain and trauma goes ignored and called “autism”.